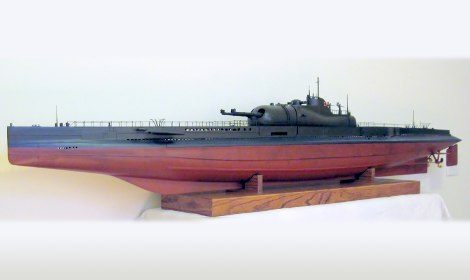 In the mid-late 1920s, the British built the “M” class range of Submarines with very large guns 12 inch plus and an on board aircraft.The Surcouf was the French equivalant submarine monitor and was commissioned in 1934.

The boats were classified as submarine monitors and supposedly they would approach a land based target submerged,surface, fire a few rounds then submerge again and disappear. This was not a very practical application of the submarine but at the time according to the powers that be it made sense.

The Surcouf was, one might assume, the French equivalent attempt at a submarine monitor and was commissioned in 1934.

Surcouf (NN3) was the largest submarine ever built when she launched in 1928. Her loss in 1942 remains a mystery to this day.

A word from the creator, Bob Dimmack:

Like the British “M” Class it appeared to have been designed by a committee.
You can imagine the conversations, lets build a submarine with very large guns so we can bombard the enemy and then disappear, great! How do we know we are hitting the target, how about having an on board aircraft to do the spotting and so on and so forth.
What was produced was something that looked good but with appalling hydrodynamics.
The British M3 was lost in a collision in the English Channel with all the crew, The Surcouf met a similar fate somewhere in the Caribbean in 1943.
We have tried to produce a model that is different from the Standard fare of model submarines and hope you will agree.