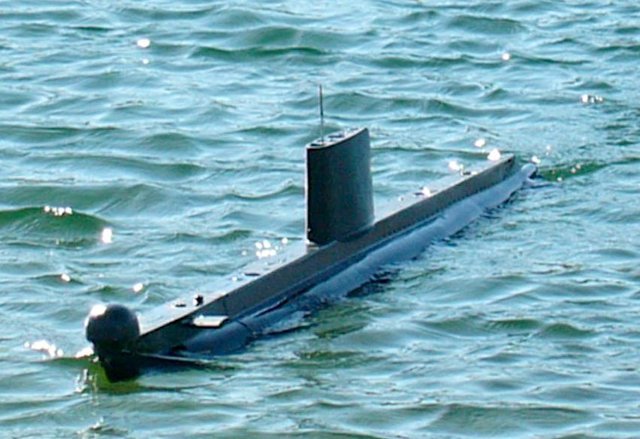 The Oberon or ‘O Class’ model shows the distinctive Type 2051 sonar dome, which gives the Oberon class its distinctive outline. Another feature is the number of ‘masts’ – no less than seven – which includes snort intake and exhaust, communications (2), radar, and periscopes (2). Powered by two Admiralty Standard Range 1 diesel engines driving electric motors, they proved to be reliable and well respected.

They were some 295ft long, 26.5 ft beam and had a surfaced draught of 18ft. At 2400 tons submerged displacement they had high underwater speed (17 Knots) and could maintain this for long periods using the snort facility, which was also fitted.

They were armed with six bow 21 inch torpedo tubes and two of the same size in the stern. In Ocelot, the stern tubes were plated over during a refit, so that a towed array sonar could be installed. This is one of several sonars carried, the most obvious being the one housed in the bow fairing.

The large distinctive sail (fin) carries seven masts for communication, radar, and, of course the periscopes. A bridge/conning position is also situated there. For the first time in submarine construction, many of the casing panels were made in fiberglass laminate, to reduce the weight.

The kit includes the hull, deck, and sail made from GRP moldings, and the vanes, rudder, and skeg which are polyurethane castings. Also included is a set of assembly drawings